Feminists In Struggle urges all supporters of feminism and of democracy to support Vancouver Rape Relief and Women’s Shelter in their continuing fight to preserve spaces for natal women alone.  According to VRR, gender activists have now convinced the city to discriminate against women in the name of inclusivity.  In the defense of their woman-only policy they raise some interesting comparisons to indigenous, ethnic, disability and other struggles. In their statement they note that many grants by the city of Vancouver are given to other organizations that serve other specific groups, but that “rightfully, none of these groups have been challenged with the demand that they demonstrate “accommodation, welcomeness and openness to people of all ages, abilities… and ethnicities,” as it would undermine their mission. However, this is precisely what they are doing in the case of VRR. The Vancouver City Council is ignoring previous court decisions affirming VRR’s right to offer some services to only natal females and attempting to force them to change this policy.  For more information on what has happened, go to their statement.

The Collective of Vancouver Rape Relief and Women’s Shelter

This site uses Akismet to reduce spam. Learn how your comment data is processed. 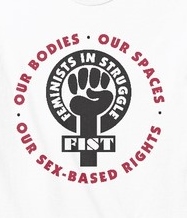 Feminists In Struggle urges all supporters of feminism and of democracy to support the defense campaign of Thistle Pettersen who has been threatened and blacklisted for her gender critical views.  Please check out the campaign’s website and sign up as a supporter! They cannot silence all of us!

Posts to our blog page by Feminist Writer are the opinions of individual FIST members and do not necessarily reflect the positions of the Feminists in Struggle organization.  Official posts are authored by Feminist Struggle.