Ann Menasche was fired from her job of 20 years for asserting that abortion bans harm women as a sex.  Find out more about her story here: Justice for Ann Menasche – Defend Feminists!

We urge everyone to sign a Statement of Solidarity in support of Ann and share it with everyone who supports maintaining sex as a protected category under law, and the rights of employees to their own political opinions and activities independent of their employer. 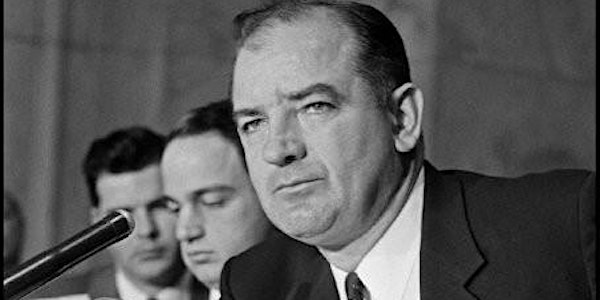 THE NEW McCARTHYISM: THE ATTACK ON FEMINISTS’ JOBS AND LIVELIHOODS is the title of our next Feminist Forum, which will be held on Saturday, December 10th at 1:00 p.m. Pacific Time, 4:00 Eastern on Zoom.

In the 1950’s it was “the Red Scare.” In the second decade of the 21st century, the methods are the same but the target is different: feminists and others who do not agree with gender identity orthodoxy that conflates sex and gender and denies the existence of biological sex.

JOIN US FOR THIS IMPORTANT DISCUSSION ON HOW WE CAN PUT AN END TO THIS WITCH HUNT SO THAT WOMEN CAN STATE OUR OPINIONS AND FIGHT FOR OUR SEX-BASED RIGHTS WITHOUT FEAR!

Christy Hammer is a sociologist with a 35-year university teaching career, and currently an associate professor of education at the University of Southern Maine. After telling her graduate students that there were only two biological sexes (with variations), students walked out of her classroom, demanded she recant, and sought to get her fired all in the name of “restorative justice”. One trans-identified student who felt personally attacked, filed a Title IX sexual harassment/discrimination complaint against her, which was summarily dismissed by the University counsel. Christy has a long history working in LGBTQ youth advocacy, and in promoting anti-racism in schools. What happened to Christy was described by others as an example of the “woke attacking the woke.”

Ann Menasche is a radical feminist, Leftist, lesbian, and founding member of Feminists in Struggle (FIST).  She was fired without warning last May from her job of 20 years as a Civil Rights attorney at Disability Rights California for asserting that abortion bans harm women as a sex, and for her FIST activity outside of work. The executive director had issued a statement opposing the threatened overturning of Roe and asked for staff feedback. DRC’s statement had mentioned every group that could be harmed by illegal abortion except women. After stating an obvious truth, Ann faced an onslaught of name-calling and slurs, and was condemned in absentia as having opinions “inconsistent with the values of the agency”.  For more on this story, see Defend Feminists

Everyone, women and men, are welcome to attend this forum!

We wish to share an important update re defending feminists in the wake of the threats made against women and the library at the Seattle WoLF event.  The threats against Thistle Pettersen had subsided, but now have escalated again at of all things, a meeting of an anti-war coalition, supposedly dedicated to peace.

We wonder why those on the Left are going along with this outrageous behavior directed at gender-critical feminists and when they are going to stand up against it?!  The so-called “activists” and others in official capacities in Madison, Wisconsin have a lot to answer for when they turn a blind eye and deaf ear towards criminal threats.

Please see:  Inciting Violence Has No Place on the Left

This is a firsthand account of a FIST attendee at the WoLF event, “Fighting the New Misogyny” in Seattle on February 1.

I attended this event for a few reasons:

From the moment I stepped out of the airport I was surrounded by fabulous women. Rhoda came and picked up three of us to drive us to our Airbnb. April had booked 14 of us into two rooms at Harbor Steps, a wonderful apartment complex.  All of our food for the weekend was provided for us, including fresh catch crab for the Saturday dinner.

Saturday we had a women’s circle which was incredibly empowering. We had started already when a few women showed up late, having gotten the time wrong. You could feel the energy in the room spike up though. It might have been Vajra Ma, who I found to be magnificent! I bought a copy of her book, From a Hidden Stream: The Natural Spiritual Authority Of Woman. I highly recommend it.

Before the women’s circle, Thistle Pettersen performed a set for us. She was magnificent! It breaks my heart that TRAs have managed to destroy this woman’s career. Please support Thistle at Defend Feminists Let’s help her get her life back from these monsters! Show her that she is not in this fight alone. We stand with her.

One of my favorite parts of this weekend was meeting some of the social media warriors that are fighting this war. When Known Heretic (aka Amy) introduced herself we both jumped into each other’s arms! What a moment. I met three other warriors at the event.

When we arrived at the event all of the protesters were forced to stay on the opposite side of the building. They never got close to us. The Seattle Police maintained a large area for us to exit also. They kept them pushed across the street. Go Seattle PD! Thank you!

I handed out handsful of FIST’s flyers for our Feminist Amendments to the Equality Act (FAEA). I was pleasantly surprised to be recognized by quite a few people from social media. I have been posting frequently about the FAEA, on Facebook and Twitter. It was great to realize that, even with only 1,300 followers on Twitter, we can make a difference. (I was wearing my FIST hoodie, represent!)

At the beginning of the first speaker, TRAs caused a disturbance in the seats. They were quickly drowned out by hundreds of voices yelling, “Let women speak!” at the top of our lungs. I remember one man saying, “Give them the mic and let them speak.” My response, “Hell no! We aren’t giving them a mic! We aren’t here for them!” Eventually the police escorted/arrested the disrupters and we continued. You can watch the presentation for yourselves at: Women’s Liberation Front Facebook page.

Each woman brought a different energy to the presentation. Towards the end there was a Q+A, and of course the misogynistic man from earlier had to be the first to the mic. He proceeded to attempt to lecture the women in the room about how we have all the rights we need. We couldn’t get him to shut up. Just as I bellowed, “You’re done!” Courtney walked over and yanked the mic out of his hands. It was excellent! She rocked it. Courtney was fearless and a blast, waving at the TRAs as we left the building. I have never met so many powerful women in one place.

If you want to become a part of something bigger than yourself. If you want to make a difference. Attend feminist events. Get involved. Make your voice heard! We are stronger together.

In summary, this was the most powerful weekend I have experienced in a very long time, if ever. There is power in standing up for your beliefs.  There is power in gathering together to combine our incredible female energies.  I came away from this weekend fully charged up to continue fighting the war.

We didn’t start this war. But we WILL end it. Solidarity!

Feminists In Struggle urges all supporters of feminism and of democracy to support the defense campaign of Thistle Pettersen who has been threatened and blacklisted for her gender critical views.  Please check out the campaign’s website and sign up as a supporter! They cannot silence all of us!

Posts to our blog page by Feminist Writer are the opinions of individual FIST members and do not necessarily reflect the positions of the Feminists in Struggle organization.  Official posts are authored by Feminist Struggle.